6/13/2018 05:20:00 pm
Rajasthan Study
0
Tribal art, as we have seen, is not art for the sake of art, but a very important part of tribal life. It is a reflection of their cultural environment, and is thus closely related to its other constituents like dance, drama, music, etc. It does not have a separate identity. In fact, none of these constituents exists alone in tribal life. They have a close rapport with one another. In the life of the aboriginals, we find that they don't co-exist, but are integral forms of one art. As it has been said.
Whatever the occasion, they draw on the walls. At the same time, the atmosphere being" festive and everyone being- gay, there is dancing and singing, which is immediately reflected in the painting. 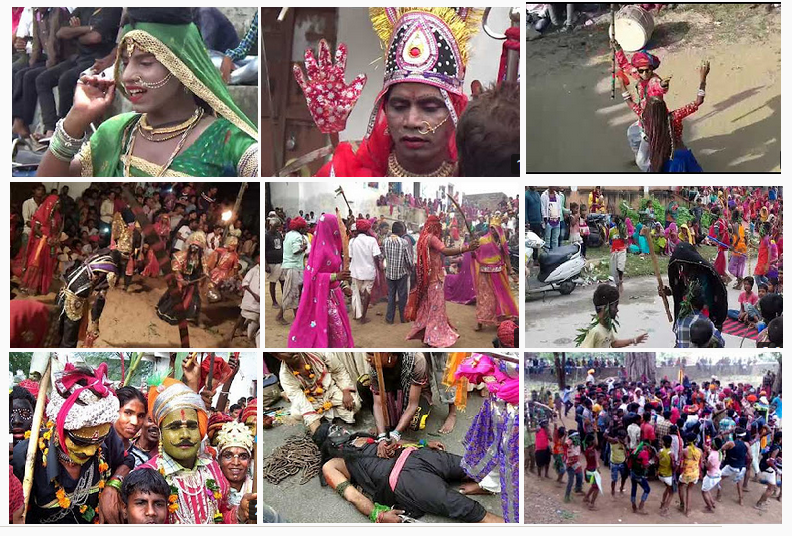 As we all know, food is most important in life, something that keeps the blood circulating. It would not be an exaggeration to say that dance and music are almost as important as food in the tribal's life. Every night, regularly, these folks dance and sing songs. Perhaps it is a means to break the monotony and fatigue of the day's work and also an easy and handy entertainment. On any special occasion, their enthusiasm is incomparable. They are so engrossed in dancing and singing that they forget their ill feelings, and enjoy themselves till the dawn breaks. These occasions also inspire them to compose songs spontaneously. It is not necessary that a song should contain some deep and profound meaning. There are some festival songs which have been sung for generations. All arts thus have an important place, as each would be handicapped without the other. They have the necessary musical instruments too.
The Bhils have various types of dance and numerous musical instruments. Ger dance (गैर नृत्य) is similar to Dandia-dance ( डांडिया) and performed during the Holi
festival throughout the night. Their instruments are flute, drum (huge and small), mandal, chang, thah, etc.

'Gauri (Gavri गवरी) is a Merunatyam (मेरुं नाट्यम) of the Bhils who have settled in Udaipur, Dungarpur and Banswada in Rajasthan. It is a dance drama, combining mime and dialogue, and is known as 'Gavri Nach or Rai Dance'. The plot is built round Lord Shiva, who is the central figure, depicted in a very strange form. The symbol of Shiva and Bhasmasura are Raiburia, Mohini and Parvati, symbolised by both the Rais, Kutkadiya and Pat Bhopa '. These five are the main characters of the dance drama and known as 'Maji'. Besides these, there are many other characters known as Kheliye. 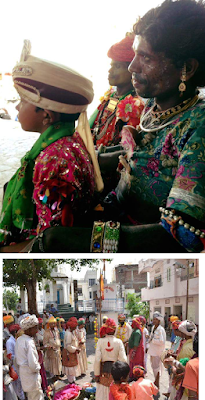 The scenes enacted are called 'Khel', Bhav or Sang. Kutkadiya is the compere who before each scene narrates the story in short, and this helps the audience to follow the play better. These stories are small parts organized around the main story. Any courtyard or any crossroad in the village is the stage. The performance begins early in the month of Bhadon (6th month of the Hindu year), and continues for about 4 to 5 weeks, from 9 a.m. to 6 p.m. every day.
Every Bhil village or 2 or 3 villages combined organize the presentation of the play. It is interesting that the villagers perform Gauri (Gavri) in the village or villages where their daughters and sisters are married.

Every member of a Bhil family considers it as a religious duty to take part in Gauri (Gavri). That's how the number of characters can swell up to a hundred. Nowhere in India does one find a play being staged for such a long time, with so many characters, in such a collective way in various villages and with such marvellous organization.


The story of Lord Shiva and Bhasmasur (भस्मासुर) is the original story of 'Gavri'. Bhasmasur, through his penance obtained 'bhasma-kada (भस्म-कड़ा)', with the help of which he wanted to reduce Lord Shiva to ashes. Lord Vishnu assumed the enchanting form of Mohini and reduced Bhasmasur himself to ashes. While burning to ashes, Bhasmasur begged Lord Vishnu to grant him the boon of immortality. The play celebrates this event. In the symbolic form of Bhasmasur, the main character 'Rai-Buria (राई-बूढिया)' wears on his face an extraordinarily artistic mask and is the central figure of 'Gauri (Gavri)'. In their life and art the Bhils do exhibit the influence of Hindu mythology. There are many stories and legends about the origin of the dance drama 'Gauri (Gavri)'. As the Bhils are the only ones who perform this play, it is important to know its relation to them.


(a) It is believed that Lord Shiva is the main God of the Bhils. Hence they have adopted the most impressive incident in Shiva's life to display their ftiith and devotion.
(b) The Bhils have been Lord Shiva's most trustworthy of all worshippers. In remembrance of Bhasmasura and to keep hisimmortality, it was very necessary to select an individual who could be given Bhasmasura's skull and in his memory perform a group dance-drama. Lord Shiva considered it appropriate that the Bhil, who brought raddish every day to his seat of meditation, should perform 'Gauri'.


(c) Parvati's father was Heemjal Bhil from Himachal. Hence the Bhils firmly believe that they are the only true worshippers of Shiva.

(d) Lord Shiva made a 'mandal of rai', which he handed over to the Bhils, and this mandal is known as 'Rai' or 'Gauri', This legend confirms their belief that their association with Shiva is ancient, that they are his sole worshippers.

There are 4 types of characters in 'Gavri', viz., gods, human beings, demons and animals.

The gods are the symbols of ideals. Lord Shiva and Parvati enter into human beings and help them, and console the grief-stricken and try to diminish their sorrows. With supernatural power they grant boons to help them accomplish their task.

(b) Human Beings-
We see any number of human characters in Gauri (Gavri) : 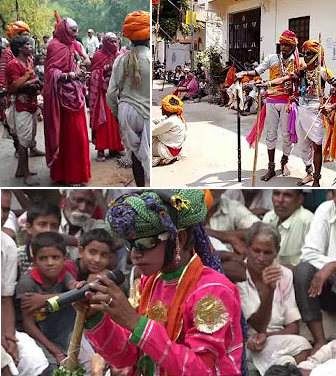 (c) The demon-
The demon characters are cruel, sadistic and troublesome. On their heads are  horns and their appearance is horrible and inauspicious. They are Khadilya Bhut (खड़लिया भूत), Bhiyanwad or Hatya (भिंयावड या हटिया) Danav etc. 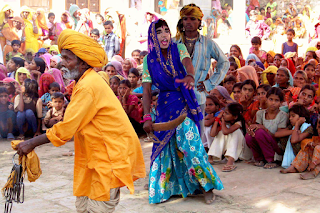 (d) The animals-
The animals of Gauri (Gavri) are not violent and ferocious. The pig, the bear and the lion are the chief ones.
The purpose behind celebrating 'Gauri (Gavri)' is not only entertainment, but mainly the performance of religious duty. And by pleasing 'Baba Bhairav-Nath (Shiva), they pray for security for the village and the villagers and safety from disease, sorrow, grief, poverty, famine, etc. Those who take part in the play find themselves so identified with the characters that their acting is superb. During- the period of the performance of Gauri (Gavri), all the actors refrain from women, wine and meat. The Bhil men and women have equal rights. But though the number of women characters in the play is quite large, it is interesting to note that no woman can take part in the play. All female roles are played by men.
Art and drama in 'Gauri (Gavri)' are inseparable. The artistic skill of the Bhils exhibits itself through dances, postures, histrionics, moulding and adorning an image, presentation, music and dialogue. The daily activities of these people are manifested here. The masks used in this play with their wonderful craftsmanship are an exceedingly artistic specimen of folk art.
Rai Buria, who is the main character of this play is recognized by his mask, which is quite huge and grand. As soon as he wears this mask, the heavenly spirit enters into 'Buria or Budiya' and the moment it is removed, he returns to his ordinary human state. These masks are decorated by sticking silver foliage and with colours. Each character has a different decorative embellishment to attract the attention of the audience. 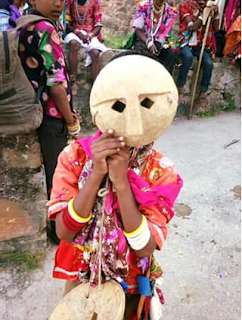 The main colours used arc black, blue, yellow and red. Various types of traditional masks are made for the Gauri (Gavri) festival. They are quite artistic. One more artistic creation produced on this occasion is the auspicious elephant of Gauri (Gavri) in clay. This beautifully decorated clay elephant is brought in on the last day of the festival at the time of the departure of Gauri. It is a beautiful ritual. This elephant is a symbol of Lord Shankar. It is said that while Bhasma-sur was running, the 'kada' fell from his hand and remained suspended in the air. Lord Shiva took it and wore it, and assuming the form of an elephant, plunged into a nearby pond. There is a grand celebration of this event. The elephant is decorated with silver ornaments, foliage, red, green, yellow and blue leaves and attractive glass pieces. And on it Shiva and
Parvati are seated very artistically. Thus the dance-drama, 'Gauri (Gavri)' has a prestigious place in Bhil life. Of all the folk dramas found in folk literature, 'Gauri' is the only one which has all the qualities of an ideal folk drama. It is a unique and harmonious coordination of art, sculpture, dance, music, drama and culture. 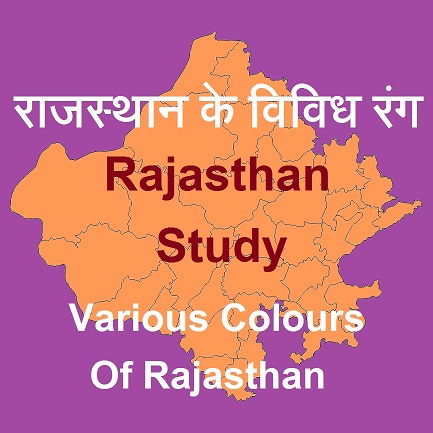 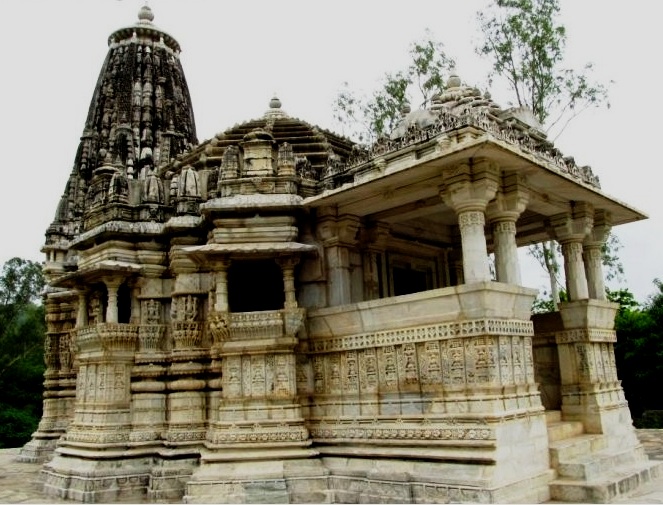